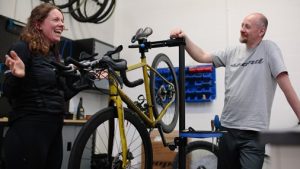 Intrepid Highland cyclist, Jenny Graham, is aiming to test Scottish bike-building expertise to the limit on the roads of 15 different countries as she embarks this weekend on an epic 18,000-mile round-the-world record attempt.

The gutsy 38-year old children’s services worker from Inverness visited the team at Shand Cycles’ Livingston factory, West Lothian, for some last-minute checks on the bike they built specially for her to smash the female unsupported world record for circling the global on two wheels.

Shand Cycles, part of Sanjeev Gupta’s global metals and industrials group, the GFG Alliance, built the bike based on their Stooshie model to enable Jenny to cover a challenging 180 miles a day on highways, by-ways and dirt tracks and slash 34 days off the current 144-day record set by Italian rider Paola Gianotti four years ago.

Jenny said she was particularly proud to be making the bid for glory on a bike with strong Scottish credentials, designed and built for her by Shand founder and general manager, Steven Shand and his team at Livingston with support from colleagues at the firm’s sister plant – Trillion – in Leamington Spa, who completed the final assembly.

She’s already completed 3,000 miles training on the machine and is looking forward to embarking on her daring journey from Berlin on Saturday morning (16th June) to secure a place in the Guinness Book of Records.

Shand Cycles offered to sponsor Jenny by creating and donating the bike after she met Steven at a cycle race organised by the women’s endurance cycling group, the Adventure Syndicate. She said: “It was amazing. They just measured me up and then produced this great machine that fits me like a glove. I just sat on it and felt ‘wow’ I am really going to get on with this bike. It was like meeting an old friend. It is a steel frame and the key with steel is that it absorbs the shock which will be important because I’ll be on all sorts of roads.”

Jenny, who is part of The Adventure Syndicate and a member of Cycling UK, plans to ride for around 15 hours a day, carrying all her own equipment. Her route will take her through Germany, Poland, Latvia, Lithuania, Russia, Mongolia, China, Australia, New Zealand, Canada, US, Portugal, Spain, France and Holland. She will take four flights and a boat journey en route.

Steven Shand said he had every faith in both rider and bike to break the record. “Our aim for Jenny was to create a bike that would give her maximum comfort, so she could almost forget it was there at all. We’re always excited by the stories that come from people using our bikes and those stories don’t come much bigger than a round-the-world record attempt. Jenny is such an inspiration and our team are so proud to be part of her story,” said Steven, who has worked with the Adventure Syndicate for nearly four years and has also made a keirin bike for Sir Chris Hoy.

Jenny also received good wishes from Sanjeev Gupta, executive chairman of the GFG Alliance whose multi-billion-dollar global business plan includes the revival of cycle manufacture in the UK. “Cycling brings so many benefits and people like Jenny are amazing ambassadors for the sport. Her ambition and tenacity are hugely impressive and I’m looking forward to seeing her break the record,” said Sanjeev who began his business career selling bikes internationally near 30 years ago. In addition to Shand Cycles, Jenny’s world record attempt is being sponsored by Leigh Day Cycling, Endura, Apidura, Unitas Global, John Hampshire Coaching, Hunt Wheels, Ritchey and Komoot.

This website uses cookies to improve your experience while you navigate through the website. Out of these, the cookies that are categorized as necessary are stored on your browser as they are essential for the working of basic functionalities of the website. We also use third-party cookies that help us analyze and understand how you use this website. These cookies will be stored in your browser only with your consent. You also have the option to opt-out of these cookies. But opting out of some of these cookies may affect your browsing experience.
Necessary Always Enabled
Necessary cookies are absolutely essential for the website to function properly. This category only includes cookies that ensures basic functionalities and security features of the website. These cookies do not store any personal information.
Non-necessary
Any cookies that may not be particularly necessary for the website to function and is used specifically to collect user personal data via analytics, ads, other embedded contents are termed as non-necessary cookies. It is mandatory to procure user consent prior to running these cookies on your website.
SAVE & ACCEPT